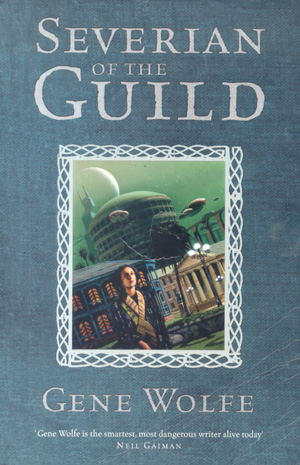 Severian of the Guild

Severian of the Guild is an omnibus edition of Gene Wolfe’s seminal Book of the New Sun sequence, considered a landmark of science fantasy writing and Wolfe’s magnum opus.

Severian of the Guild is an omnibus edition of Gene Wolfe’s seminal Book of the New Sun sequence, considered a landmark of science fantasy writing and Wolfe’s magnum opus. The Book of the New Sun — indeed, Wolfe’s writing in general — divides opinion sharply; it is rare to find someone who has read Wolfe who remains ambivalent to him, but lavish praise and fierce antipathy are commonplace. The eponymous hero Severian begins the series as an apprentice of the obscure Torturer’s Guild in the city of Nessus, and he experiences a revelatory event in the necropolis near the Guild’s tower which causes him to begin questioning the established dictums of authority — both those of his guild and those of the society beyond it. As a result, he later transgresses the rules of the Guild by helping a prisoner to commit suicide and is effectively expelled for it, though he is saved from the ignominy of death at the hands of his fellow guildsmen by the seeming compassion of his old Master. Instead, Severian is sent out into the world beyond Nessus to take up a post as the torturer and executioner of a distant city — a form of exile that falls just short of excommunication. The Book of the New Sun follows Severian’s travels and adventures as he slowly departs the vast urban sprawl of Nessus and heads out into the wider world, meeting a variety of fabulous characters and visiting extraordinary settings along the way. It’s a staggering feat of imagination. Despite — or perhaps because of — Wolfe’s deliberate use of archaic but genuine words instead of invented linguistic novums, Severian of the Guild burgeons with passages and scenes that take your mental breath away. Wolfe’s writerly eye for imagery is flawless, and he can paint pictures with words that have the bright emotional colour of impressionist painting combined with implied detail that would make Hironymous Bosch gnash his teeth in envy. The Book of the New Sun series practically embodies the late Arthur C. Clarke’s aphorism that all sufficiently advanced technologies are indistinguishable from magic, and as a literary device it enables Wolfe to bridge high fantasy and posthuman space opera in a single work. Good condition, but 3 pages got loose. Ολόκληρος 4τομος κύκλος «Το Βιβλίο του Νέου Ήλιου» σε ένα βιβλίο. Σε καλή κατάσταση, αλλά 3 σελίδες έχουν ξεκολλήσει.